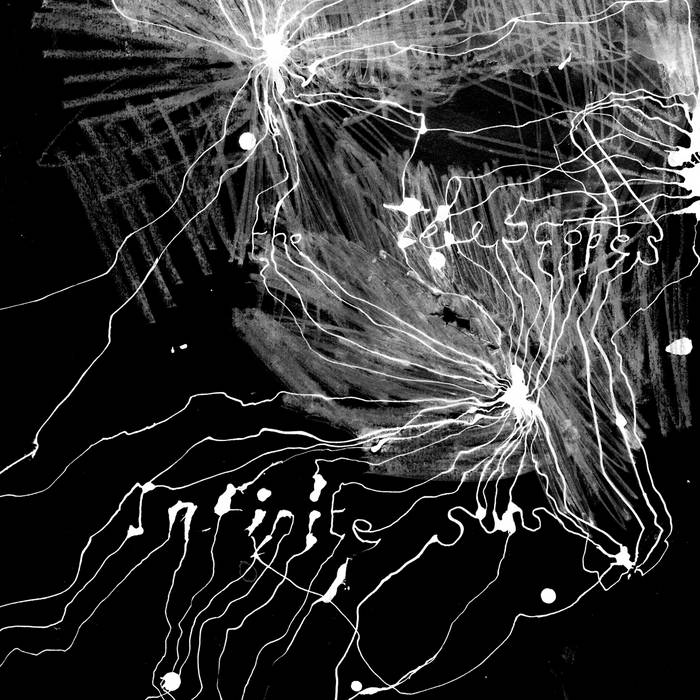 soaring feedback, guitar manipulation & viola which forever spiral outward, fractal and hypnotic - a bed of noise percolating at the edges of audition.

possibly the outfit's most visceral and intense album to date.
(iD)

sounds like they had Varg Vikernes on the mixing desk, with Sin Nanna sitting in on production duties - this is as scratchy as the scratchiest black metal record you've never heard, something akin to Thurston Moore's latest noise recordings if you've got a 43rd generation cassette copy. It's filthy and about as punk rock as avant garde noise gets, and that's no bad thing.
(BoomKat)

The five tracks of Infinite Suns are recorded onto analogue tape with recording levels set to intentionally overload. The album is literally packed with noise, often distorting so much that the recording itself breaks down into glitches of silence. It’s hard going, but impressive in its relentless focus. Across the album is shared a set of harsh, tinny core tones and textures, with each track digging around the roots in an exploratory fashion. ‘Thought Loops’ has a weirdly human, intensely repeating, pained voice throughout – pretty hellish stuff.
‘Northumberland’ is a purer circular drone, touching down and taking off regularly, delightful in its simplicity. ‘Tidal bandwidth’ is akin to being trapped within a broken wind tunnel: occasional rising and falling tones are buried beneath layers of fuzz and noise. ‘Chrome gulls’ is violent and sporadic, until descending into a relentless, bloody-minded scrawl of noise and feedback.
Easily listening this is not, but an interesting development for an outfit with a 20+ year lifespan it most certainly is. The Telescopes in their current form are several worlds apart from the band(s) they once were – but listen back to their earlier output and you can spot hints of experimentalism that are finally being given absolute free rein and free experiment.
(Diskant).


A collaboration between Telescopes founder/consistent member Stephen Lawrie and Vibracathedral Orchestra's Bridget Hayden, it is a chaotic noise infused work that could shred the speakers with the best of them. Closer inspection, however, reveals that at the core, both artists show their pedigree, and that's what sets this apart from other similar records.

Recorded in a room supposedly used by a psychic medium, the sessions were specifically recorded via environmental microphones, with the volumes set to the max. Undoubtedly this is what gives the record its raw distortion that, due to its dynamic noise quality that simply cannot be created via digital technology. While this sheen of noise covers almost every track, it doesn’t fully obscure the underlying performance and instrumentation. The opening track, "Static Charge," features a clatter that could be a metal shop, but is more likely a guitar track that has been amplified to the point of full distortion. It has a rhythmic sense to it (something many projects this close to the noise spectrum seem to forget), but is obviously due to playing, not looping. As the track wears on the gain is turned up to the point that full clipping is achieved, as sound starts getting cut out from the mix.

In some situations the noise is the dominant theme: “Thought Loops” starts out a bit less aggressive, but by the middle what sounds like a buzzsaw cuts into the mix and demands attention, and the track only becomes more harsh and chaotic from there. The closing “Chrome Gulls” also follows on this path to harsh noise-dom, with its unadulterated feedback and metallic high end ringing, which even though it has a more tense vibe than any other piece on here, eventually gives way to some treated, vast ambience at the end.

Others are less apt to focus on the noise and more on the underlying melodies that are obfuscated amongst the grime. “Northumberland” opens on a more melodic note and some melody is immediately apparent, even if the sound is that of a string quartet playing in the deepest depths of hell. “Tidal Bandwidth” is another track that is based around oversaturated tape recordings, but there’s a deeper, almost synth like pulse that gives a more melodic propensity.

A difficult album to pin down, because it does feature elements of dissonance, but those are equally met by subtle melodic parts that could be easily ignored. For all its harshness, it is a complex album that is worth exploring the layers of.
(Brainwashed)