← more from
Tapete Records
Get fresh music recommendations delivered to your inbox every Friday.
We've updated our Terms of Use. You can review the changes here. 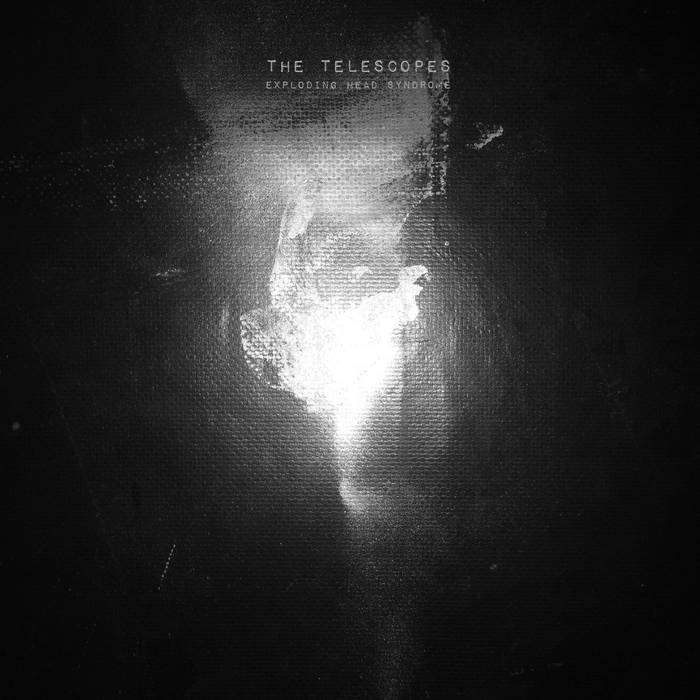 this will be on my videotape

Get the CD/LP here:
shop.tapeterecords.com/the-telescopes-exploding-head-syndrome.html

Welcome to the 11th studio album from The Telescopes, their third for Tapete. Consisting of eight new songs and incantations that form a series of sonic convulsions stretching the parameters of intuitive composition to the point of auditory illusion.

Exploding Head Syndrome (EHS) is the name given by John. M. S. Pearce in 1989 to a phenomena described by Robert Armstrong-Jones in 1920 as ‘snapping of the brain’. It is a condition in which a person experiences unreal noises.

*Until The End was co written with Chris Plavidal (Stumptone) and is dedicated to the late Nevada Hill (Bludded Head).

“Rousing sedated melodies under a blanket of distortion.” 4/5.
(JB- Mojo)

"If this LP were a debut album by some young new psychsters they would be being raved about and hailed to the rafters as the second coming, the next new big thing.”
(Brian Shea- Monolith Coctail)

"If 2019 is meant to be the year of the concept album then Stephen Lawrie has suitably nailed it here."
(Dom Gourlay- Under The Radar)

“If Lawrie wants to come out of his cave every few years and release music this good then I’m all ears.”
(Dagger Zine)

“Overall, this album is a 10/10 and we highly recommend you add it to your vinyl collection and though only February we assure you that this album will feature highly on our end of year list!!”
(Paula Michelle Hamilton- Levitation)

“what most distinguishes this record is…beauty. While up to this point a province at least implicitly visited by the enigmatic Lawrie, here on Exploding Head Syndrome, inside the usual buzz and disturbance of electronic manipulation and gently riffling curtains of noise, that too-often lazily attributed b-word, though indeed subjected over these eight tracks to stress tests of varying intensity, seeps through and rises to the surface in quiet triumph everywhere one listens.”
(Dave Cantrell- Stereo Embers)

“This is a sad record, at times touching, and at times worryingly familiar. Lose yourself in it.”
(Adam Hammond- Isolation)

“exploding head syndrome might well prove to be Mr Lawrie’s most minimally absorbing collection to date”.
(Mark- The Sunday Experience)

"What is perhaps most telling about this band is how passionate their fans are. Even though there aren't millions of Telescopes fans around the world, those who love the band really really really love them. And they don't just listen to one song and forget the group, they follow along with whatever Lawrie and his pals have to offer. That says a lot. Exploding Head Syndrome is yet another mind-tingling addition to a wonderfully imaginative discography."
(Baby Sue).

“Although the basic ingredients of The Telescopes’ music haven’t really changed, it is Stephen’s willingness to experiment with texture and tone yet stick with the basic craft of writing a good song that makes the lonely furrow he is ploughing one that is well worth following.”
(Mr Olivetti- Freq)

"This shit is sleepy heroin couch blues. And, true to form, these are some pretty unreal noises best listened to upon waking or when you’re about to go to sleep."
(Brightly Off-Coloured Discophile- Album A Day)

“This time Stephen Lawrie manages to delight us with uncomfortable sounds, melancholic and sometimes hallucinogenic atmospheres, which succeed in making us love this latest yet seductive work of art.” 7.5/10
(Ben Moro- Indie For Bunnies)

"Melancholic and hallucinatory, melodic and destabilizing, this Telescopes work is like a strange magnetic field that questions what we believe we know about the concept of psychedelic rock . There is minimalism and the "rock song form" on the one hand, asphyxiating feedbacks, loops, drones and (apparent) dissonances on the other. But the truth is that Exploding Head Syndrome expresses a softness out of the ordinary, like that pleasant feeling of exhaustion that is experienced after reaching an important goal." 8/10. (Alessandro Zoppo- Perkele.it)

“languid and druggy, but isn't the best music that too?”
(Glen Kenixfan- A Pessimist Is Never Disappointed)