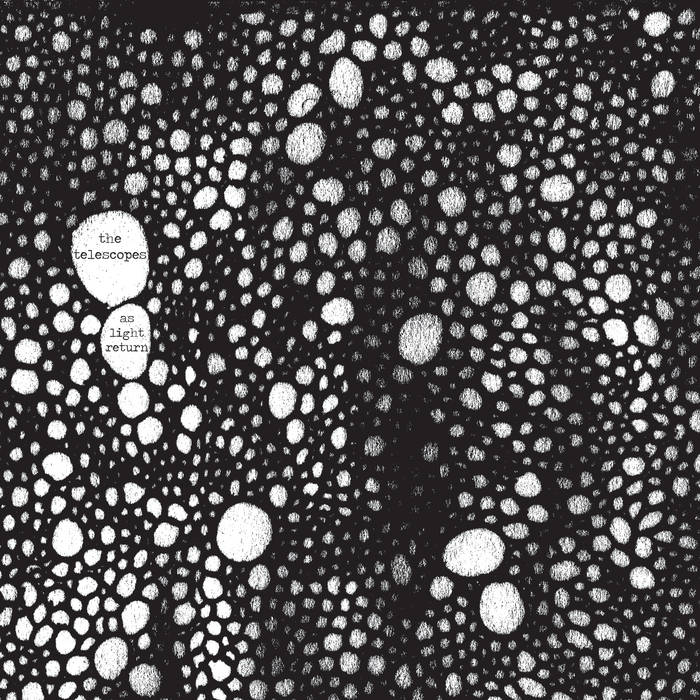 Thibaut Devigne Shoegaze on the noise part of the genre. The guitars are here used mainly as massive distorted drones. Sometimes other instrument emerge and a vocalist can be heard within the sound. ts all very well done, but difficult to describe in words. Fortunately, once can just listen :-) Favorite track: You Can't Reach What You Hunger.

Evolving oscillations of guitar feedback screech and howl through thick layers of distortion. Overtones shift and drift and combine on a carpet of white noise. In the eye of the storm, the voice of Stephen Lawrie remains calm, almost detached. He intones a low, trance-like chant. The vocal is buried deep in the mix, the lyrics just barely discernible.

The Telescopes are back with their ninth album. Founded by Lawrie in 1987, the band has been through various phases and a long list of different members and associates. This time he is joined once again by members of the band St Deluxe, tracking the album at the esteemed Riverside Music Complex in Glasgow.

As Light Return is The Telescopes' second album for the Hamburg label Tapete Records, following the release of Hidden Fields in 2015. The new album maintains the balance of it’s predecessor, setting a parallel course between song based noise structures and freeform impressionism, while containing some of The Telescopes most crucial listening so far.

These songs pay no heed to conventionalities. This music has an implicit power. The listener is free to enter a vast sonic universe and determine a personal set of coordinates.

As Light Return – from the harrowing void.

"Pushes The Telescopes sound to newer often much darker places. It's a bracing and occasionally totally disarming listen, but utterly compelling throughout."
(Jake Kennedy - Record Collector) 4/5

"It ain't pretty but there's a warped beauty at play that will appeal to fans of everyone from Godspeed You Black Emperor to Mogwai. The album's closer, 'Handful Of Ashes', is a white knuckle ride akin to shoving one's head in a cement mixer for 14 minutes and discovering you can still breathe - and hear - afterwards. What's not to like?"
(Chris Twomey - Shindig! Magazine)

"In an era where shoegaze has become as non threatening as the latest Take That, 'As Light Return' truly scares. It takes me back to when I was actually frightened by My Bloody Valentine 'Feed Me With Your Kiss'. Gruesome. 7/10".
(Clinton - Norman Records)

"The Telescopes are one of the quintessential architects of British experimental rock movement."
(Ron Hart - Bandcamp Daily)

"Lawrie isn’t averse to singing tunes, but he saddles them with lumbering cadences and heaping clouds of looped guitars until it seems like the noise is the point. Each of the record’s five songs inches closer to that conclusion, but it’s the epic finale, “Handful Of Ashes,” that makes the case. With the drums withdrawn and the guitars circling like hurricane clouds, it completely embraces the maelstrom."
(Bill Meyer - Magnet Magazine)

"The Telescopes are a name familiar with anyone who has been around the psychedelic genre in the past ten years and this release will be welcome to their ears, whilst at the same time attracting new fans who like anything slightly darker than the norm."
(Le Crowley - Backseat Mafia)

"What The Telescopes do that I don't think many other bands do is to use noise not as something to bludgeon us with but something to soothe us. And they take great care in constructing the sounds on these albums so that they stand up to repeated listening. There's always something new to discover. 30 years after they formed and with only one original member remaining, The Telescopes are doing their best work now." 5/5
(Sean Hewson - Soundblab)

"anything remotely whiffing of the Telescopes is observed and devoured with bouts of near fainting swoons in this gaff this ‘un particularly so given it comes bliss bathed in a fizzing wall of sound."
(Mark Barton - The Sunday Experience)

"A kind of overcoming that supplies The Telescopes to immortality, since it is in postmodernity. R & R NEVER DIE."
(Gioele Valenti - Rockerilla Magazine)

"For me, Stephen seems almost to have re-invigorated The Telescopes in a far subtler and further-reaching manner than a lot of bands of a similar vintage. With ex-labelmates Ride and Slowdive essentially re-inventing the wheels of their heyday, Stephen has chosen to almost abandon any memories of the band and plough ever onward, restless, mercurial, unique. I wish him great fortune wherever he may go next."
(Mr Olivetti - Freq Zine)

"The last thing you can do with this As Light Return is put it in a box. What you think about it will depend on what you want to do with it. It is possibly the most context-dependent album of the year. You aren’t going to find any of the sweetness of ‘Perfect Needle’ and that’s precisely the point. Uncommercial, unconventional, uncompromising."
(Helen Angell - God Is In The TV)

"It puts you under its spell but with a tone that assures you that enlightenment awaits."
(Robert Ham - Paste Magazine)

"English space rock veterans The Telescopes emerged in the late 80s alongside fellow heads Loop, Spacemen 3 and My Bloody Valentine
and this ninth album adds fuel to the argument that they deserve their place among these luminaries as one modern UK psych's most important bands." 4/5
(Jamie Bowman - The Skinny)

"from the feedback echo chamber pop of opener “You Can’t Reach What You Hunger” to the harrowing “Handful of Ashes” that closes proceedings with a wall of supple disturbing textures that postulate Bernard Hermann in a very dark and heavy, narcotised space and is marvellously spellbinding, matched wave by wave the churning eloquence of its centrepiece track, it would seem we’ve found, in one Stephen Lawrie, someone defying the effects of age, and in fact defying anything that would dare try to hinder him. A triumph, an absolute triumph."
(Dave Cantrell - Stereo Embers Magazine)

"An essential addition for any real music collector and will no doubt feature in many 'albums of the year' list."
(Paula Michelle Hamilton - Levitation Magazine)

"An excellent addition to the Telescopes' catalog, and a furthering of the sounds put forth by these pioneers so long ago, As Light Return is a fine record. Long-time fans of the band should find a lot to enjoy here even as newer ones easily embrace these ragged guitar-based ruminations. Stephen marvellously still has his unique gift for crafting stuff like this and I recommend this record heartily."
(Glen Griffith - A Pessimist Is Never Disappointed)

"a deeply impressive record that paints greys on blacks in recordings that began to decay at their moment of inception. This is true of all life, but it's a massive theme seldom captured in sound. Pretty much essential."
(Isolation)

"The sound gently envelops, wraps up like a boa constrictor, but the result is strangulation. 10/10."
(Karina Smirnova - Rock Cult. Russia)

"This album makes the perfect companion piece to "Hidden Fields" and if you haven't already, I suggest you get both and hunker down. 10/10."
Leo Newbiggin - Whisperinandhollerin)

"An epic, throbbing slab of space rock that sounds like a horror film sound track being put through a blender. It’s both compelling and unsettling."
(Chris Whitee - MusicOMH)

"It is easy to imagine the musician hidden in his gloomy basement of deep England, surrounded by pedals, cables and gadgets, completely immersed in his joy of distortion while unleashing all his imaginary psychosis. Welcome to the more heavy album of The Telescopes."
(Raul Julian - Muzikalia)

"How good is As Light Return? Play it for the neighbours and they’ll be putting their house on the market (crabgrass and all). That’s how good."
(Dagger Zine)

"Stephen Lawrie has followed his unique, artistic vision for thirty years, and he is doing this today with a clearness never before."
(Luser Lounge)

"As Light Return illuminates you like lightning in the storm, It slides through your ears at the speed of light".
(Discos Marcapasos)

Exhumed and Gruesome's Matt Harvey checks in, with jams from Cannibal Corpse, Midnight and more